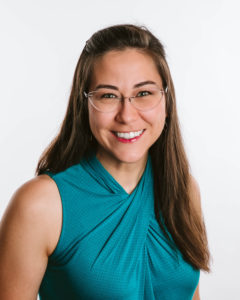 The 2020 recipient of the Denise L. Smith Volunteer of the Year award is Hope Harms, past president of Truman’s national Alumni Board. Hope graduated from Truman in 2007 with a bachelor of science in linguistics. Immediately following graduation, she worked in Truman’s office of admission before pursuing a master of library science. Hope reengaged with Truman State University as a member of the Kansas City Alumni Chapter board in 2013. She joined the Truman National Alumni board in 2014 and has served in a variety of positions on the board. Hope is a tireless volunteer who brings boundless Truman pride to each and every role she has held. She brings fresh ideas and meticulous attention to detail to projects such as event planning, scholarship selection, social media, leading strategic planning and bylaw revision as well as launching virtual programming.

In addition to her involvement in Truman, Hope stays connected to her local community by singing with the church choir and volunteering with the local running club.

Hope and her husband honorary Bulldog Tyler live in Overland Park, Kan. with their three cats.

The Truman State University Alumni Association created the Bulldog Forever Volunteer of the Year Award in 2012 to honor a volunteer leader for exemplary service to the University through the Alumni Association or any of its affiliated organizations. In 2019, the name of the award was changed to the Denise L. Smith Volunteer of the Year Award in honor of the late Denise Smith, who served as the director of alumni relations at Truman for many  years.

This award recognizes individuals who have sustained outstanding volunteer service to Truman State University through the Alumni Association and reflects length and depth of service on the part of the recipient.

Each year, one award is given to a member of the Truman Alumni Association who is a current member of a chapter and/or club. The Alumni Association encourages and appreciates the financial support of alumni gifts to the University. However, the Volunteer Award is intended for and elevates the service and time given to the University by our volunteers.