At Truman, students like Josie often pursue master’s-level research as an undergraduate student. Josie’s trailblazing research on horse temperament could pave the way for a more standard and objective way of measuring the personality of a horse — useful for horse buyers, sellers and breeders. 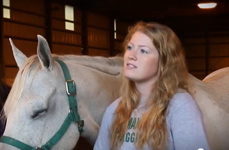 Josie Foley, a native of Nevada, Mo., transferred to Truman after earning two associate degrees at Cottey College in her hometown.

As an agricultural science major at Truman, Josie Foley combined her interest in horses and her interest in doing research to develop a project focusing on horse temperament. The goal of her research project, “Development of an Objective On-Farm Equine Temperament Scoring System,” was to find a way to show the personality of a horse so that they are more likely to be adopted.

Under the supervision of Kelly Walter, assistant professor of agriculture science, Foley developed and tested two different scoring scales for horses. The first, the “tie test,” grades a horse’s temperament on a one-to-six scoring system based off behaviors the horse displays while being tied in an enclosed area for a period of 10 minutes. The second, the “obstacle test,” assigns a score of one to six based off the amount of time it takes for a horse to cross a new and unfamiliar obstacle of a chute made using a plastic tarp with raised sides.

A McNair Scholar at Truman, she was one of 26 students selected to participate in the TruScholar Undergraduate Research Program. Through the TruScholar Program, Foley presented her project at the Summer Research Symposium. She also presented at the Joint Annual Meeting of the American Society of Animal Science, the American Dairy Science Association and the Canadian Society of Animal Science.