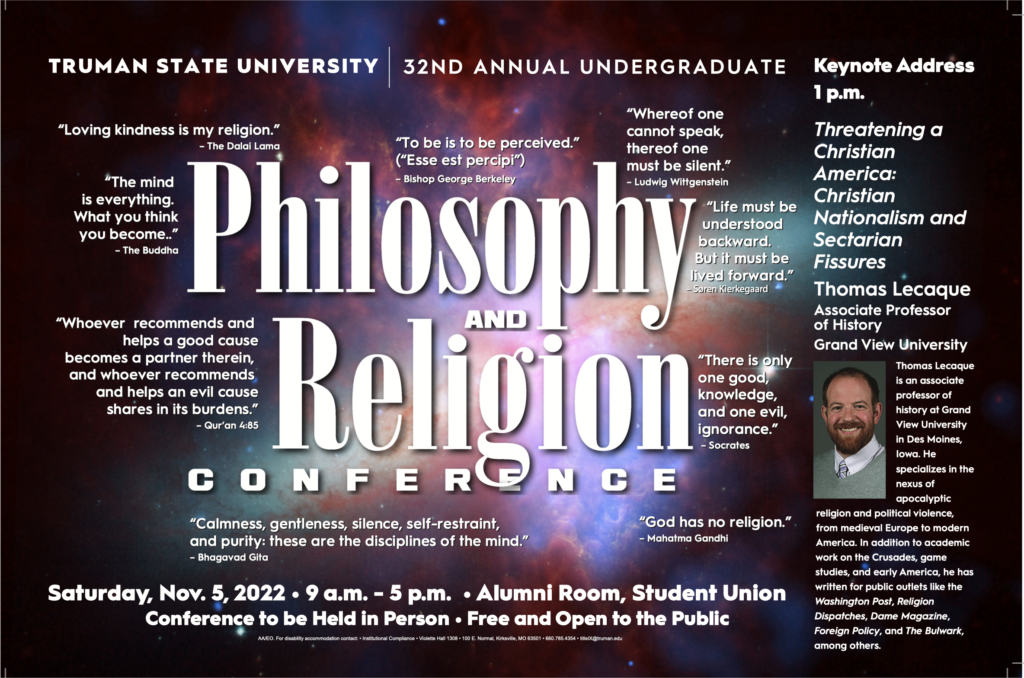 Guthrie Stroh, Truman State University: “The Ketuvim and the Kafkaesque: A Case Study in Jewish Literature”

Kafka’s work has come to symbolize many absurd and humorless bureaucracies, but there is more than existential helplessness lurking beneath its surface. While not a single instance of the words “Jew” or “Jewish” appears in the entirety of work published within his lifetime, Kafka’s personal diary and letters are utterly haunted by the specter of Judaism. Kafka’s private life clues us into how this apparition materialized in his writing, offering solid evidence in support of a Jewish interpretation of its recurring themes. This paper will therefore present a critical analysis of how Kafka’s Jewish identity presents itself in his oeuvre.

Matthew Trager, Macalester College: “An Account of Simplicity in Hume’s ‘Of Self-Love’”

In “Of Self-Love ”, David Hume gives some puzzling statements on simplicity. While he accuses philosopher Thomas Hobbes of relying too much on simplicity in his argument of psychological egoism, Hume praises his own theory for its simplicity. So, is Hume mistaken or confused? Perhaps he has a more nuanced take on the nature of simplicity. There have been some scholarly accounts to uncover what exactly Hume meant. But, I will raise some doubts about ever discovering a consistent account of simplicity in Hume. However, I will analyze some promising paths going forward if we wish to decipher what Hume thinks about simplicity.

The 203 AD Passio Sanctarum: Perpetuae et Felicitatis, is a martyr narrative in which Perpetua, a young Christian catechumen, is held under arrest for her beliefs. During her imprisonment, Perpetua has four visions. In the second and third visions, Perpetua has visions involving her dead brother, Dinocrates, that are evocative of baptismal imagery; between the two visions, she makes intercession on behalf of Dinocrates, “pray[ing] on his behalf,” and granting him salvation. This is reminiscent of the practice of vicarious baptism that may have taken place during the early years of the Christian church.

Gabby Tremblay, Creighton University: “A Domestic Abuse Paradox: The Catholic Church as Cause and Solution”

Sociological research shows that domestic violence against women is perpetuated by patriarchal norms that create hierarchal power structures in the family, yet the Catholic Church has only addressed domestic violence in individual cases. This study shows that Catholic marriage practices and atonement theology create an even larger power disparity between married Catholic couples. Thus, for the Church to proactively address domestic violence, it must recognize these root causes rather than merely addressing the effects. Additionally, the Church has the power to change core beliefs and thus advocate for a proactive solution, which lies in promoting family justice.

There is a narrative building in our country, promoting a Christian nationalist pseudohistory to justify a Christian nationalist present, that America is a Christian country. But Christianity contains multitudes, and that many spiraling branches that agree on the divinity of Jesus of Nazareth agree on relatively little else. The current Christofascist movement has papered over those differences that would guarantee a civil war on the other side of their victory—a civil war that has deep roots. This talk with look at contemporary American Christian nationalism, their rhetoric and pseudohistorical underpinning, and then go back to the vast early America they hearken back to. The violence and religious conflict that permeated the era of “Christian nationalism” they pretend to see, the era of colonial wars and rebellions in the long eighteenth century, will illuminate the still-present sectarian conflicts that riddles the heart of their project.

Thomas Lecaque is an associate professor of history at Grand View University in Des Moines, Iowa. He specializes in the nexus of apocalyptic religion and political violence, from medieval Europe to modern America. In addition to academic work on the crusades, game studies and early America, he has written for public outlets such as the Washington Post, Religion Dispatches, Dame Magazine, Foreign Policy and The Bulwark, among others.

The romance genre, while often characterized as cookie-cutter and repetitive, contains messaging and impact much deeper than may be expected. In this paper, the role of apocalyptic romance literature is examined through Laura Thelassa’s Four Horsemen series in its relation to abusive relationships. The author of this paper argues that these books–and the genre at large–aid the abused partners in such relationships in examining their experiences by relating their own experiences with a situation in which these experiences appear justified or overcomeable. By using unconventional tropes and settings, as well as concepts such as redemption and fate, apocalyptic romance novels offer their readers cathartic and comforting ways to live through and overcome relationship abuse.

To some Jews, the persecution, struggle, and hardship experienced collectively by the Jewish people adds meaning to their Jewish identity. To French absurdist philosopher Albert Camus, the struggle experienced throughout life is what gives meaning to life. Despite neither growing up Jewish, nor later converting to Judaism, the parallels between these two philosophies suggests a possible connection. Through examining sources detailing Camus’s life and influences, sources explaining the Jewish conceptualization of the struggle, and sources detailing the impact Camus’s work has had on the Jewish community, this analysis highlights many close connections between these two philosophies. Further research is required, however, to determine which philosophy informs the other.

Christian Science, a Bible-based religion, focuses on following Jesus’ teachings to achieve spiritual healing of both physical injuries and moral deformities. Mainstream American culture in the late nineteenth and early twentieth century had a progressive streak — creating fertile ground for the radical Christian Science movement to thrive and grow. Beginning in the 1930s, Christianity became more conservative. Conservative Christianity set new expectations for women’s role in church and community. This presentation explores the progressive context of the early Christian Science movement and the way in which Christian Science reflects shifting social attitudes regarding views of women through the twentieth century.

This paper argues that the Strong Black Woman schema (SBW) is a coping mechanism which is context sensitive regarding its cost/benefit ratio. The concept of the SBW is analyzed through a context-based methodology. In this way the evolution of the SBW schema from its conception through modern day is explored. Specifically, this paper explores the relevant variables that exist within the environments of each differentiating contextual time period which play a role in the cost/benefit analysis of the SBW schema, and the adoption versus imposition of the SBW schema as a coping mechanism.

The conference organizers gratefully acknowledge the support of the Department of Philosophy & Religion, the Dr. Patricia Burton Honorary Endowment, and the Student Selection Committee.

Find out more about recent past Truman Undergraduate Philosophy and Religion Conferences.