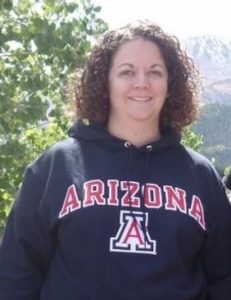 Originally from Overland Park, Kan., Jamie Matthews attended Truman State University from 2004-2008, earning a Bachelor of Arts in psychology and sociology/anthropology. While at Truman, Jamie served in several roles with Residence Life, held leadership/volunteer roles within the Office of Admissions and participated in faculty-led psychology research on subjective well-being. Jamie also has a Master’s degree in student affairs in higher education from Miami University in Oxford, Ohio.

Jamie worked from 2010-2016 at Southern Illinois University-Edwardsville (SIUE) within housing, and then the University Center. She also was chair of Safe Zone, SIUE’s faculty/staff LGBT advocacy group. In 2016, Jamie traded in the Midwest for the desert of Arizona, currently working at the University of Arizona as an Associate Director in Housing & Residential Life.

Outside of work, Jamie is taking classes toward a Ph.D. in higher education; she plays string bass in a community orchestra and plays steel pan in the UA Steel Band. In 2015, Jamie started a quest to eat a donut in every state, having had donuts in 15 states thus far!