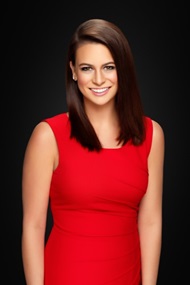 Hillary is the managing partner and co-founder of The WestBrooke Group, a full-service political fundraising, event planning, and public affairs firm.

Hillary moved to Colorado in 2012 after working in Missouri politics throughout high school and college. She was hired by the Romney for President campaign to plan and manage all political events and rallies in Colorado, including the iconic Red Rocks Rally in October 2018.

Following the Romney campaign, Hillary went on to manage and oversee fundraising efforts for a wide variety of candidates for public office, including Presidential, statewide, Congressional, state legislative and mayoral races.

In 2014, Hillary was recognized as one of Alpha Sigma Alpha’s “Thirty under 30.” In 2018, she was named one of Denverite’s “Rising Stars in the Denver Area.”

Hillary has a degree in public communications from Truman State University (Class of 2012). She and her husband, Justin, live in Denver with their dog, Ike.