The life-size Harry S. Truman statue, located in the Ruth W. Towne Museum and Visitors Center on the campus of Truman State University, is an exact replica of the statue at the Truman Library in Independence, Missouri.

The original statue was created specifically for the Library’s Harry S. Truman: The Presidential Years exhibition that opened in December 2001. The Truman Library Foundation commissioned the statue from StudioEIS of Brooklyn, New York.

The pose and expression are not from one single photograph or event. The designers were tasked with creating a statue that is recognizable but also friendly and approachable because they wanted visitors to walk right up to it and have their pictures taken with it. 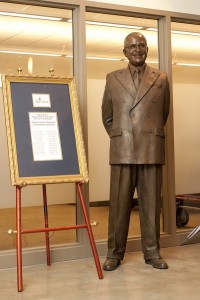 Truman Bust
A bust of Harry S. Truman is located on the first floor of Pickler Memorial Library. It was presented to the University by the Truman Alumni Association and affiliated alumni chapters on July 1, 1996, in celebration of the University name change to Truman State University.

The bust was created by sculptor William J. Williams.